I was waiting at the checkout stand at wal-mart the other day and found a casserole magazine. I started thumbing through it and found that It had a ton of great recipes in it. So I bought it. (i am a sucker for a good recipe book/magazine) This is the first one I have tried and it turned out great! I revised the recipe a bit, so here is my version.

1 can of cream of chicken soup

Salt and Pepper to taste.

In a large mixing bowl, combine aspargus, rice, ham, lemon pepper seasoning, 1 1/2 cups of the cheese. In a saucepan on medium heat, combine the soup and broth and heat until hot, then add 1 cup of cheese and whisk until the cheese is melted. Pour the sauce over your rice mixture and mix until well blended. Add salt and pepper to taste. Cook at 350* for 20 minutes then sprinkle the rest of the cheese on top and cook another 10-15 minutes. Or until hot and bubbly. 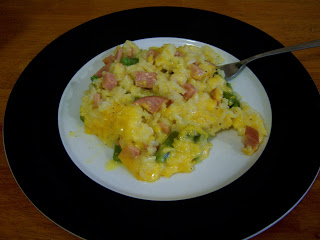 When I saw this recipe, I thought it was a very intresting combination! But we LOVED it. I made it for my two year old because she LOVES aspargus! I can never give her enough of it. So I thought she would love this casserole and she did! I was really happy with the way it turned out and I am defintely adding this one to my recipe box.